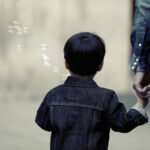 In November 2018, the UK Children’s Commissioner published a report warning that children are being datafied from birth. In the last few days we have seen a plurality of press articles talking about datafied children. But what does it really mean to talk about the datafication of children? What can we learn from the research on the topic?

When I launched the Child | Data | Citizen project in September 2016, there was little research out there that engaged with the topic of the datafication of childhood especially within critical data studies and media research, although there was certainly more in the fields of criminology, surveillance studies and law.

The issue of children’s surveillance has been a topic of investigation before the advent of big data. This is evident in the collection Surveillance, Children and Childhood (2010) edited by Steeves and Jones.

However, with the extension of big data and predictive analytics technologies new questions about children’s dataveillance have come to the fore. The works of Montgomery (2015) on Children’s Media Culture in a Big Data World, Leaver’s chapter (2015) Born Digital? Presence, Privacy, and Intimate Surveillance, Savirimithu (2015) on Digital Profiling of Children, and Holloway and Green (2016) on The Internet of Toys were ground-breaking in this regard.

Also ground-breaking was the  edited collection by Taylor and Rooney (2016) titled Surveillance Futures: Social and Ethical Implications of New Technologies for Children and Young People. In here, we can find the works of Gard and Lupton (2016) on digital health, of Williamson (2016) on personal learning analytics in education, or the one of Van Brakel (2016) on children and pre-emptive surveillance.

The issue of children’s data is of course not only an issue of dataveillance and privacy but also a question about children’s ability to build their public self and moral autonomy. This question was brilliantly addressed by the work of different scholars who focused on ‘sharenting’ and looked at the impacts of social media data on children’s construction of the public self.

Key contributions here can be found in the work Ammari et al, (2015) on How Parents Manage Children Online Identities, of Oswald et al. (2016) on ‘Generation Tagged’, and of Blum-Ross and Livingstone (2016) on parent blogging and the boundaries of the digital self. At the time, I was  also particularly interested in social media presence. Yet my main focus was on the construction of political identity. It is for this reason that I wrote a blog post My Child is an Anarchist, a Communist, a Feminist, (2016, Parenting for a Digital Future), which was then followed by the publication of a journal article on political identity construction and social media narratives titled Digital Citizens? Data Traces and Family Life.

Research on children’s social media presence is vast and ever expanding. There is no space to list all the different contributions here, especially because the issue has been explored from a plurality of angles, including media law (see the works of Steinberg, 2016 on Sharenting and Children’s Privacy, Bessant on Parental Rights to Publish, 2017), media ethnography (see Bosh, 2016 but of course Schofield Clark, 2013 was the very first to start working on this with her book the Parent App) and many other fields.

At present, a lot of new and exciting research is emerging on the complexity of social media data, see for instance Leaver’s Co-Creating Birth and Death on Social Media, but also Gordon’s(2018) work on how the social media data of children is surveilled and used by journalists.

When we think about the datafication of children, however and as argued elsewhere in this blog,  social media presence  is just the tip of the iceberg. This became evident in 2017 with the publications of two edited collections: the Livingstone and Third Special Issue on Children’s Rights in the Digital Age (2017) and the Infancy Online (2017) Special Issue edited by Leaver and Hansen.

In these edited collections we find the following articles that address the datafication of childhood as a complex phenomena beyond social media data. The Datafied Child  by Lupton and Williamson, which maps the different technologies that datafy children and argues that children are being transformed into quantified selves. Also worth mentioning the Intimate Surveillance article by Leaver that explores the surveillance of early infancy and the data privacy implications, and the Babyveillance article that I wrote and which focuses on the concept of ‘coerced digital participation’ and argues that children are being coerced into digitally participating to society through data traces long before they are born.

Similarly to the study of children’s social media presence, also the study of dataveillence and apps is growing exponentially. It is worth mentioning here Lupton’s (2018) contribution titled Caring Dataveillance which explores dataveillance from a new angle, based on the observation of the practices and feelings of Australian Women.

All these works reveal that the datafication of childhood is an extraordinary complex and messy process. This is because surveillance and predictive analytics come from a plurality of angles, political economic structures and from messy digital practices.

My personal belief is that we are just starting to understand the datafication of childhood. There are many different issues that we need to address. My own research focuses on how the emergence of the “datafied child” raises critical question about the ways in which digital citizenship is being re-defined by the surveillance and tracking of citizens from birth. It is for this reason that in October 2017 I submitted the chapter the Child as Datafied Citizen: Critical Questions on Data Justice in family Life  for Digital Parenting book edited by Mascheroni et al. (2018). In the chapter I explore how we can think of children as datafied citizens.

I also argue that it is important that we avoid essentialist images of the “datafied child”, which understand children as quantified selves, surveilled and profiled by corporate platforms and algorithmic logics. In fact, what is missing from this essentialist understanding, is a careful reflection about the messiness, unpredictability and inaccuracy of processes of datafication in family life. Some of the arguments have been referenced and further developed by the latest work of Giovanna Mascheroni on Researching Children as Datafied Citizens or the one on Datafied Childhoods.

My understanding is that with the development in biometric data gathering technologies as well other forms of behavioural tracking the line between consumer rights and citizen’s rights is becoming excessively blurred. In this context we not only need to radically re-think children’s data privacy, as  Livingstone (2018) has successfully done, but we need to highlight the multiple ways in which children are being profiled and scored, and to start reflecting on what it means to seek Data Justice for Children.

Yet this is my personal take on this. Please feel free to add new publications or leave comments and ideas below.

Barassi, V. (2018). The Child as Datafied Citizen: Critical Questions on Data Justice in Family Life. In G. Mascheroni, C. Ponte, & A. Jorge (Eds.), Digital Parentinng: The Challenges for Parents in the Digital Age(pp. 169–176).

Lupton, D (2018) Caring Dataveillance: Women’s Use of Apps to Monitor Pregnancy and Children. Preprint of a chapter to be published in The Routledge Companion to Digital Media and Children. Edited by Lelia Green, Donell Holloway, Kylie Stevenson, Leslie Haddon and Tama Leaver